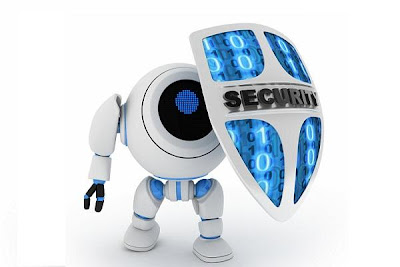 As much as I would love to have a little robot (particularly one with Man City blue colouring in places) guarding Izzy 24hrs a day, I haven't, nor will I have, the mere idea is bonkers.

What I will use of course is chains, not battleship chains, that's a song, but a form of security chain (look out for more on this in a later post), predominantly for when Izzy's completed (I know that day will come eventually) and is away from the secure garage where she currently resides. 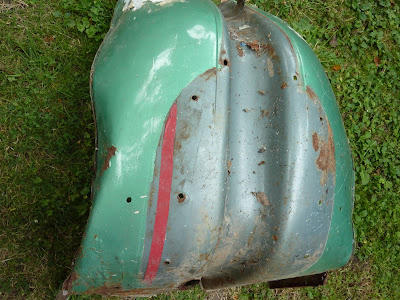 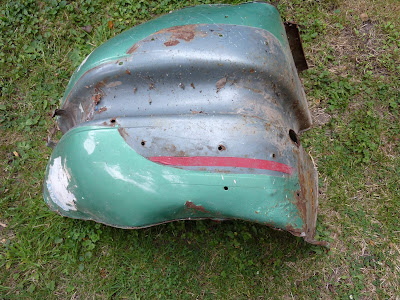 They aren't, obviously, but the 2 red stripes were originally on all Spanish TV175's so will find their way on to the legshields of mine, when it comes to the finishing touches. I know you can only see one of the original ones in the pic but if you look at the bottom pic (horizontal stripe) you can see the second strip under the added paint, as a raised line.

Why have I suddenly thought about this, well, I didn't put any pictures up of what I have been doing recently (fitting cables and loom) as this still isn't completely done (waiting on a few more bits) they are pretty much where they will be staying but only held by tape at present not the correct clamps, ties. I also popped a spare (rather old and incomplete) engine into the frame in order to make sure cables were in the right place (length wise) as the actual engine that will be going in is not finished yet. I say not finished, its not even started, as it will be the last thing I do once everything else is done (bar a few finishing touches, like red lines lol) mostly due to the fact this will probably be the dearest part of the rebuild.

I think an accurate description for what I have been doing recently is "pottering about", makes me sound incredibly old (well I am getting that way) but its the best way I can describe the loads of little bits I have been doing, tinkering with the wiring/cables and various other bits of bodywork, spraying tank straps (managed to get a perfectly matching white) confirming what extra bits/parts I need, figuring out what I'm likely to do with the engine and working out what bits I want chromed. This includes the gear change and throttle housing as these were annoyingly never sprayed all those years ago when the rest of it was done. I also annoyingly don't have any of the paint or the colour identification so cant now get these bits done. I may, in fact I'm sure I will, once it is done, go somewhere and get a colour match done and some paint made up and get them sprayed, it would also be handy to have some for any little bits that need touching up, but for now, they are going to be chromed, I can delay no more. its been tool long as it is :-)

I also forgot to mention in my last post, I finally thought of a name for IT too, I know I haven't used it yet and have used the word "it" in this post, but from now on IT will officially be know as Izzy, there are reasons behind this that I will no doubt explain in another post (just to bore you further) but not now, so, Izzy it is, which sounds a bit like izzyitis, which could be a medical condition, although its not. I seem to have overloaded on labels for this post too so I really should stop, more Izzy updates soon.............
Posted by Neal at 16:45 No comments: 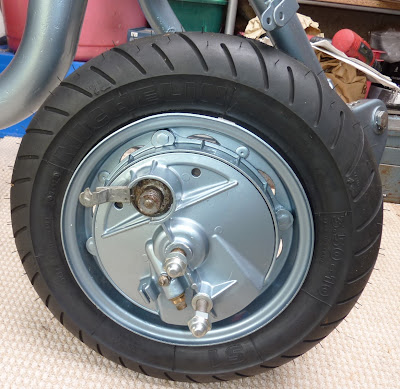 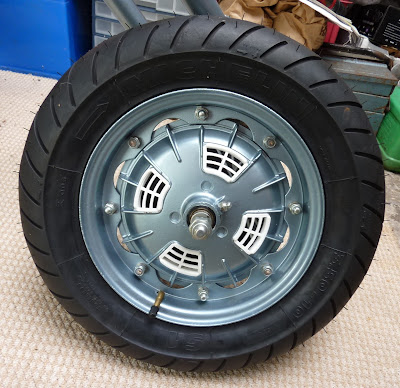 Ok it wasn't recent, it was a ridiculously long time ago......

This must officially be the slowest Lambretta rebuild ever (though I imagine there is one in a darkened place somewhere that has taken longer) .... (he says hoping it is true but not totally convinced). I wont even attempt to explain why there has been a long hiatus this time, but I will say I plan to crack on with it now, while funds permit at least.

So back to the disc brake, as I said in my last post much of the TV is Italian, the disc brake being another example of this and it is the latest thing to be reassembled, over the past week or so. New bearings, oil seals, pads, washers, nuts and nipples (sort of rolls of the tongue doesn't it) were used, along with anything else that needed replacing, I have kept the original disc as it is unmarked and they aren't cheap to replace (just for the sake of it) likewise the original operating arm was retained as it functions perfectly and like the disc, is undamaged. I wanted to see it with rubber wrapped around it (not linked to the nuts and nipples comment earlier I hasten to add) so couldn't resist popping the type and rims on. I have gone for Michelin S1's, I am sure everyone has their preferences, but for me (having used them on my Vespa for many years) I think the grip and ride quality is excellent, I also love the look (well it has to play a part surely). Obviously safety and performance are more important though and it excels on both counts in my (and many others) opinion so a pair (with matching inner tubes) were ordered. Just need to get the operating arm cover, i cap, put some air in the tyre and its done.

Once the disc was assembled and encased in rims and rubber I wanted to see how the white (which certain parts are painted) would look against the blue that forms most of the colour, so after putting the stand and splash plate on (not white) I fitted the rear mudguard, just to see how it looked against the blue, works for me. 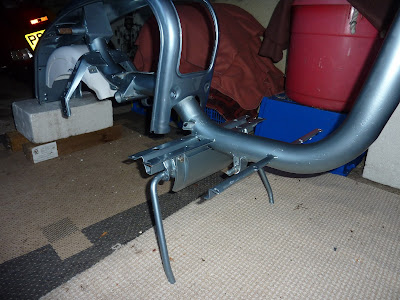 Next up, cables and loom to be fitted to the frame, followed by various bits of bodywork. This WILL be over the coming days/week so expect another update soon, honestly, I mean it this time :-)
Posted by Neal at 14:39 No comments: