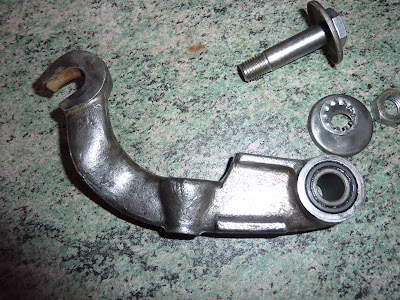 I was quite surprised how well they (the dirty links) came up with a bit of effort. A Dremel is a wonderful thing, certainly made the task of cleaning them and making them shine (in places) a lot easier.  As you can see below (in a pic of one of the links back in the forks), once I had cleaned all the decades of grime off, they were returned to their rightful place. 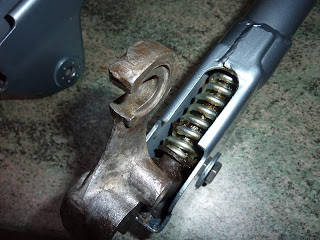 Along with new bushes and bolts, new springs were fitted to the forks as well as new bolt in buffers. It made for an interesting time fitting the links back into the forks, with an uprated spring and large buffers top and bottom (used this combination before and makes for a stiffer suspension with a nice firm ride, works for me). I know people that do undertake this procedure without a fork spring compressor but I'm very much of the opinion that making things as easy as possible for yourself is sensible. So I do, ok maybe not in all aspects of life, or even all aspects of rebuilding IT, but as far as the forks go, easy as possible all the way thank you.

The next pic is the last of this post and isn’t particularly exciting, but I took it anyway so its going on the screen, if you don’t want to look don’t, I cant make that decision for you. All I can do is tell you what the pic contains and you can then make a choice whether to look or not. Its a pic of 3 wonderful items that made putting the links back into the forks much easier (than it would have been without them). The spring compressor, the trusty rubber mallet and a clamp that I used to pull the links into position so I could put the bolts in, first time I had done it this way, goodness knows why I hadn’t sooner, made it sooooooo much easier, no scraped knuckles, scratched paint or expletives, all very civilised. 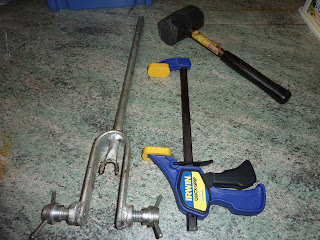 Email ThisBlogThis!Share to TwitterShare to FacebookShare to Pinterest
Labels: shiny 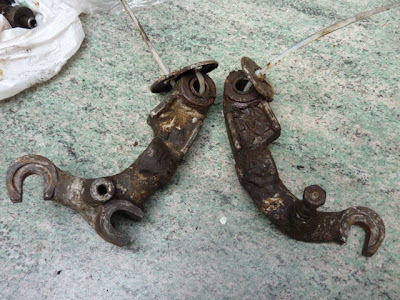 Well what were you expecting to see with a title like that?

Ahhhhhh, I know, you thought I meant “dirty links”, ok, just for you, here's one, dirty link

As I have finally decided to make a start on the poor neglected beasty........ Need to think of a name for it really, I know some folks name their scooters, cars, bikes, hovercraft etc but I haven’t with the TV as yet. In the past I have named scooters and cars, not all of them, no real pattern to it really. The daily Vespa (210) doesn’t have a name, neither does the daily car (A3, soon to be A1) but the less than daily beetle does (Bert), see, no pattern to it. But I cant keep calling the TV, “the TV” reminds me too much of the Bowie song TVC 15. Which, I hasten to add, is nothing to do with a transvestite but based on an acid trip Iggy Pop had at Bowie's house during which he thought the television was swallowing his girlfriend. Not a good image, a new name is paramount methinks.

I will use IT for now, not flattering, or particularly inventive but until I think of something else IT will do.

So, as I am making a start on IT I thought the best place to begin was the forks, rebuild them and get them in the frame. The first step being the links. I have kept the original ones and as you can see they are rather grubby, almost 50 years of grub possibly, so cleaning them is the first step. Once this is done I can fit new bushes and bolts and get them to where they belong, back in the forks.

Email ThisBlogThis!Share to TwitterShare to FacebookShare to Pinterest
Labels: IT 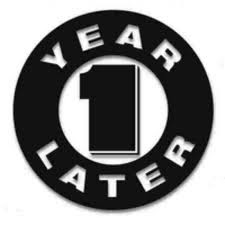 A word often used in the same sentence as a Lambretta, on this occasion though its not about anything mechanical. The reliability (or lack of it) that I'm referring to is my posting. Its been over a year, I knew it had been a long time (too long) but really didn't know it was that long. That's bad, really bad :-(

I could go into detail about why (or even briefly) but it would take far too long, suffice to say I've been ultra busy with other stuff and got sidelined, for over a year! (that really is bad). I may explain a bit as I go on (probably on the other blog) that has also been neglected for about as long. Much catching up to do methinks.

Anyway, that other “stuff” is now in hand (might need to rephrase that) and I'm finally going to crack on with the poor neglected TV, which, to be fair, is probably all you want to know as that’s why your looking at this (if anyone still is lol).