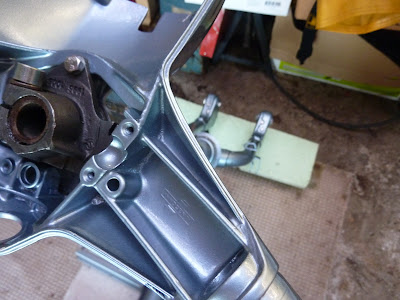 Not sure if such an expression exists (pretty sure it does), but I do know there are plenty of folk that can be a bit on the “selective” side when it comes to all things Lambretta, as in, if it isn’t Italian (doesn’t have the famous Innocenti logo stamped on it) then its not worth having.

Personally I have never been of this mindset, I have encountered various Lambrettas (and parts) in the past (owned, worked on, ridden, lusted after, etc) from Italy, Spain and India and for me, if its up to the job it matters not where it was made.

If its of poor quality, then, fair enough you wouldn’t put it on your pride and joy but having that “mythical” (ok I'm being a bit tongue in cheek) Innocenti logo stamped on it tends to increase its desirability to certain people, to ridiculous levels. You only need to take a look at the prices that some of the “dusty unwanted stuff” “new old stock” or “scrap junk I wouldn’t give you tuppence for” “second hand but original” parts and related items that change hands on ebay (and other places) to realise this.

Anyway, back to IT (really need to think of a name) I’m not sure if I mentioned in an earlier post but it is a very early Spanish TV 175, the guy I got it from is a big fan of Spanish Lambrettas and also quite an expert in this area.. He has numerous models himself, including a series 3 TV, which he thought was the earliest known example, but mine is a few numbers before his, thus making mine, possibly, the earliest known example. He was tempted to keep it for himself, for this very reason, but after some arm twisting (and the fact he is a top bloke) I managed to come into possession of it.

The point of that bit of nostalgia being that all early in the run Spanish models were predominantly made from Italian components due to the Innocenti factory shipping over any remaining parts along with the tooling (to make said parts) when they finished one model and started on a new one, with me? If not you can always ask for clarification, if you’re still there lol.

That’s it, the forks are rebuilt and back in the frame, with accompanying new cups and bearings etc., the headset base is also attached (well it would have been rude not to given the top of the forks were sitting there waiting for something to be attached to them) and as you can see in the pic, they, like much of IT are actually Innocenti, though Spanish, keeping up? wonderful :-)