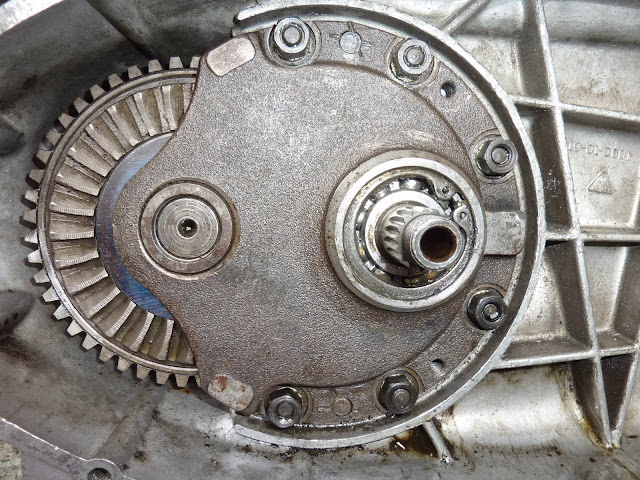 I will make no excuses for the title of this post enabling me to make a shameless link to a song, its a catchy little number (as they say)...(who says?)...(no idea). I have to say I prefer the Who's "rockier" 70's stuff as opposed to the earlier stuff, but its all good and very enjoyable (in my opinion).

So, the post title, why "shout shimmy" (and yes I know the song is shout AND shimmy) well, its because "shimming" the gearbox did, at times, almost (I didn't but it was close) cause to me shout at times, hence, shout shimming shimmy.

I thought I would be clever (never learn re that one) and put the gearbox end plate on without the bearing fitted first (as I had already removed the old one), to make popping it on and off easier, which it did, so that I could check the clearance and make sure the right size shim was fitted.

Once I had figured out which size to use, I fitted the new bearing to the end plate and then tightened everything down as per the suggested torque settings. For some reason (probably incompetence) it took me several times to get it right still. I think (actually I know) a lot of the problem is that I try to be too thorough and precise. I also figured, if I was going to "tinker" with it and make sure the right size shim was in place, it was better to do it now, than once everything in the engine case was back together and the engine was in the frame.

So that is it, that's all I have to say, the gearbox is in and the end plate is on (finally) so that this post done.

Well, there will be a few more words and some more pictures but please don't read on unless you feel really compelled. 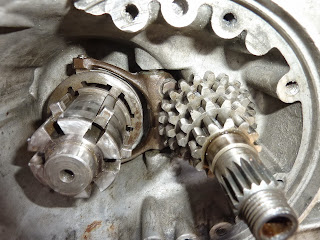 Above you can see the layshaft, gear selector, sliding dog (you gotta love the names) and Christmas tree, see, great names, a better scooter related Christmas tree would be this, but its neither a Lambretta, or a Christmas tree, in a gearbox sense. As with everything else in the engine, new bearings, o rings, oil seals etc have been used throughout, just because there is no picture doesn't mean they aren't there and aren't shiny new :-) 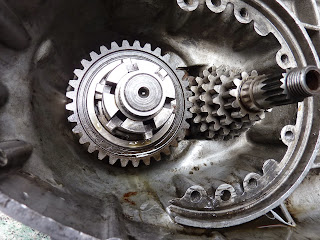 Then we have a fourth gear (above picture) guess what's in the picture below? Go on, guess....... 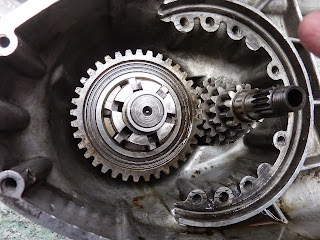 That's right, you guessed correct, third gear, do you fancy theorizing what might be next? 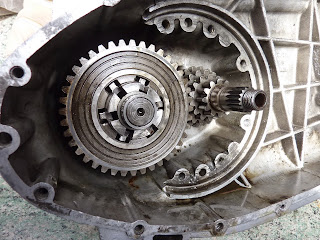 Second gear of course, definitely a pattern emerging here (though they aren't pattern gears, they are original)  but you know what I mean. 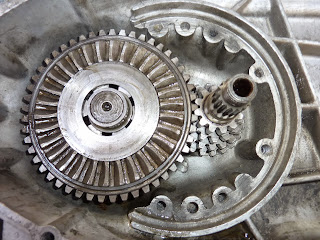 Last but not least, you can see above, first gear, hurray, we made it. I have kept the original TV 175 gearbox as these are apparently quite good for "torquey" engines, which I think mine will be given the kit, exhaust etc. If need be, it can always be changed, or elements of it (the drive sprocket, crownwheel or individual gears) but I am thinking I may as well try it as it is before tinkering further as it could well work just fine. Also, I could try a different combination (or complete gearbox) that doesn't work great and end up changing it anyway, so stick with what's there is my choice for the gearbox :-)
Posted by Neal at 20:13

Email ThisBlogThis!Share to TwitterShare to FacebookShare to Pinterest
Labels: gearbox, the Who, tinkering